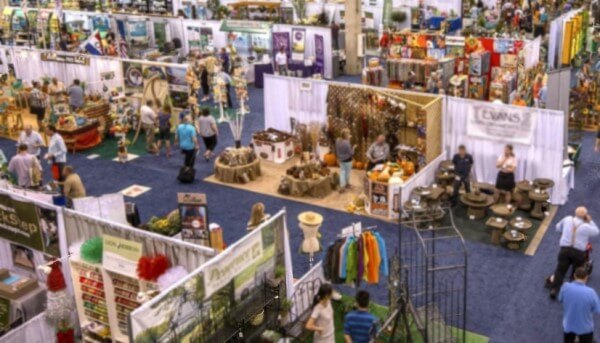 Pipe and drape has long been the “go-to” for trade show backdrops because it’s quick to set-up, fast to break down, portable & reusable, and affordable. When you combine all of these features, it’s easy to see why pipe and drape trade show booths are used for exhibitor spaces at convention centers, job fairs, and all kinds of expositions!
By utilizing the Slip Fit system -- where the Upright pipes are simply placed over a cylindrical base pin -- a crew is able to set-up a large venue in a fraction of the time compared to Screw-In style pipe and drape. And tear down after the show is just as fast.

Most trade show booth dimensions include an 8 foot tall back wall, and 3 foot tall side walls. Further, the back wall width is typically set to 10 feet wide, and the depth of the side walls is usually 10 feet.

While that is the most popular trade show booth size, we’ve had clients with different needs, such as having all sides of each booth be 8 feet tall (rather than the usual 3 foot tall side walls), or a more spacious 20 foot wide back wall for premium level exhibitors.

These types of customizations are easily achieved with pipe and drape, though this article will base configurations on a standard trade show booth size.

(If you have any unique booth space requirements, we’re always happy to help you figure out the right pieces!)

Now that we’ve gone over the basics, let’s dive right into some of the most commonly used configurations:

This one is pretty easy…it’s a free standing trade show booth! This is a dedicated space for an exhibitor that is not connected to any other booth.

This is a row of side-by-side trade show booths with the 3 foot tall side wall serving as the divider (“rail”) in between each booth to separate each exhibitor.


3. Back To Back Trade Show Booths

Think of the In Line trade show booth configuration above, but going a step further by also having “north” and “south” facing booths. That is, picture side walls also separating booths that are located on the back side of the In Line booth photo.

Looking down from the sky, it would look something like this:

Whereas In Line booths merely go in a single-file row (and all face the same direction), Back To Back trade show booths go in a row PLUS have a front facing and rear facing exhibitor space.


Setting Up the Exhibit Space

Every venue is different, from the available floor space area, to the total number (and types) of booths that will be set-up. With an infinite number of ways to arrange the exhibit floor space, there’s no one “right way” to do so.

However, as a general rule of thumb, Single and In Line Trade Show Booths will typically be placed around the outside perimeter of the venue, while the interior area will consist of lines of Back To Back Trade Show Booths. 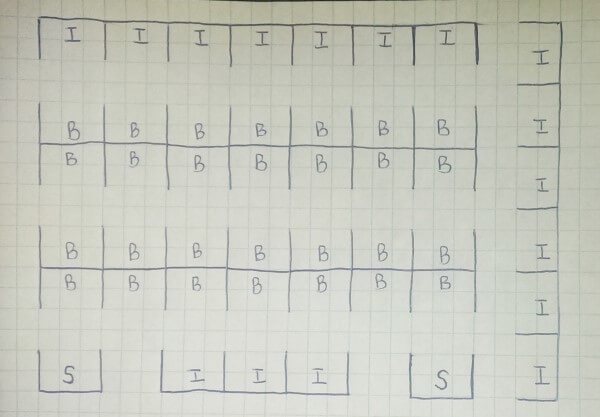 As one of the largest pipe and drape manufacturers in America, we’re here to help make turning your trade show floor plan drawing into a reality as easy and affordable as possible! Our website is set-up so that you can add the exact number (and style) of booth spaces with just the click of a button.
A Single Trade Show Booth is as easy as typing the number of these types of booths in the Quantity field.

In the floor plan above, there are 2 Single Booths (denoted by “S”), so adding a quantity of 2 would take care of those.


For In Line Trade Show Booths, you would start each section with a “Starter” and add the appropriate number of “In Line Connecting” booths that you would need.

If I add up all of those In Line sections, I’d need a total of 3 In Line Starters and 13 In Line Connecting.


Back To Back Trade Show Booths follow the same logic. You would start each section with a “Back To Back Starter” and simply add the number of “Back To Back Connecting” booths that you would need.

If you’re ever stuck, or just want a second pair of eyes to look over your work, send us your floor plan and we’ll be glad to help out. We work with pipe and drape every day, and have seen hundreds of floor plans from our clients over the years.

It doesn’t have to be fancy or even professionally drawn (my floor plan drawing example proves that!). We’ve worked off of everything from a CAD rendering of a floor plan, all the way to a set-up that was jotted down on a paper napkin!

If you have an idea of how you want your pipe and drape trade show booths arranged, we can help make it happen.